Kopua – The Place and Some of its History

The first Cistercians were disillusioned with their large Benedictine monastery and the excessive noise and the distractions from their primary role – to pray seven times a day. They wished to be “restoring the literal and primitive observance of the Holy Rule of St Benedict in the new Monastery” (1) So in 1098 the first Cistercians Stephen, Robert and Alberic moved to a remote location on a poor and uncultivated area of the French countryside in Burgundy. After fifteen years the first Cistercian monks had developed the land into a productive unit which it remains today. Around this time, they were joined by St Bernard and thirty companions. This remote part of France was becoming a destination.

Around 700 years later in 1832, following the reformation in the United Kingdom, some Irish Cistercians returned to their homeland from France. They accepted 600 acres of wasteland which in some places was covered in heath, gorse and rushes. There was only one building on the property – a gamekeepers’ house. It took a couple of years for 25 acres to be cultivated by hand and the Abbey now called Mount Melleray flourished. By 1952 Mount Melleray Abbey became the Abbey that had founded more Monastic communities in other places of any Abbey within the Cistercian Order. Some in America, one in Australia at Tarrawarra and other countries. It is from Melleray Abbey that the first monks came from and settled with many hardships in Kopua.

In 1954, following the invitation of Cardinal McKeefry of Wellington, six Cistercian monks from the Abbey of Mt Melleray in County Waterford in Ireland, arrived in New Zealand. Led by Fr Basil Hayes, they established a Cistercian monastic community in a rural property on Kopua Road in Hawkes Bay. The land had been donated by farmers Thomas and Rosalie Prescott. The following year another group of monks arrived from Ireland. Initially the monks lived in the shearers’ quarters (now called the Honey House). Then wooden buildings were transferred from the former Pahiatua Polish Camp to provide dwellings, dining room, library, guest accommodation and a church. Most are still in use today. The early years were challenging in many ways. In 1960 the community was established as Our Lady of Southern Star Abbey with Fr Joseph Murphy as the first Abbot.

Cardinal McKeefry wrote in a Preface to The Cistercians: Their Life and Ideals; Southern Star Abbey 1960 “It is my fervent prayer that the Abbey of Our Lady of the Southern Star will draw many souls towards it and deepen our sense of spiritual values through its life of prayer and work , for when work is sanctified by prayer , work becomes a prayer.” 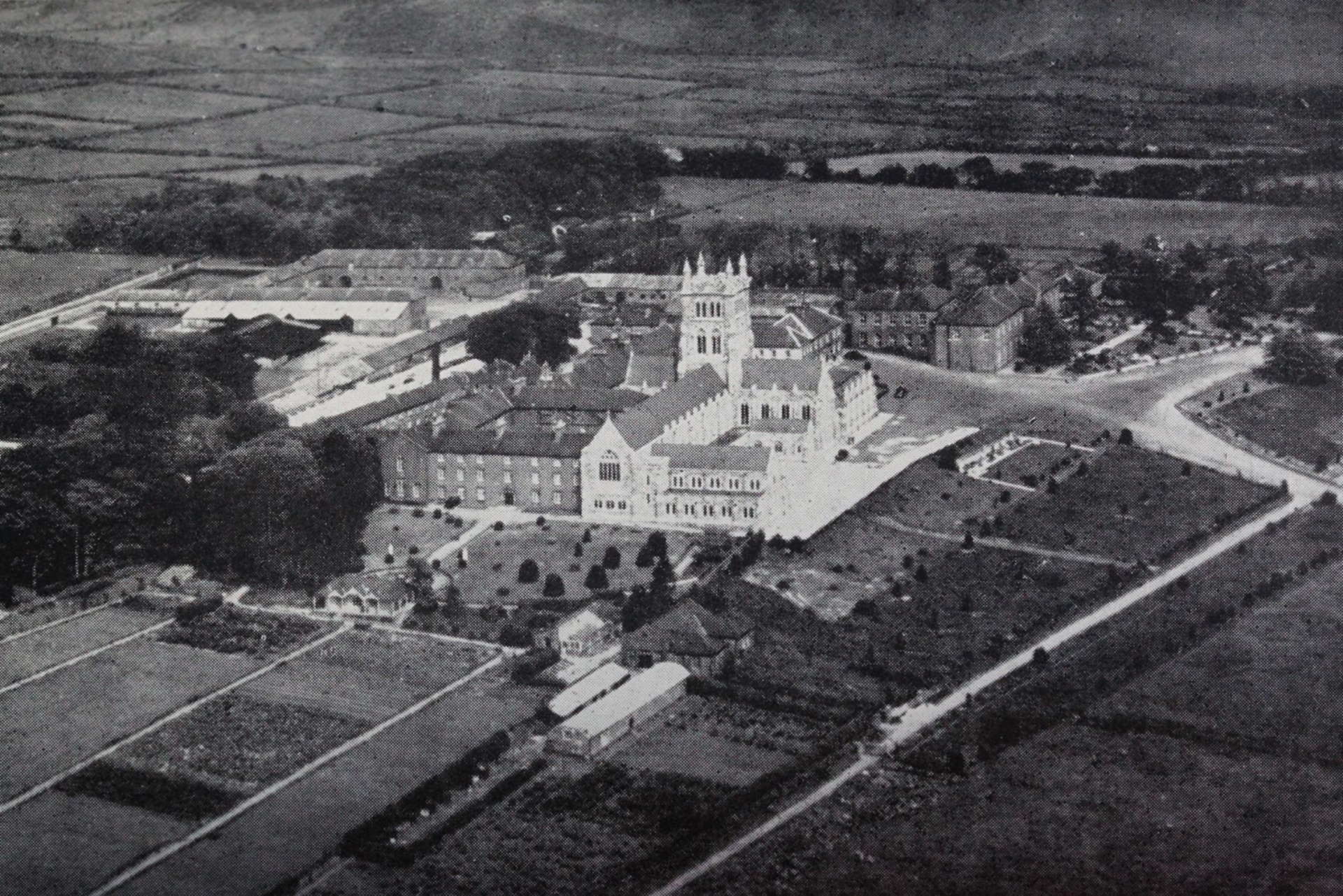 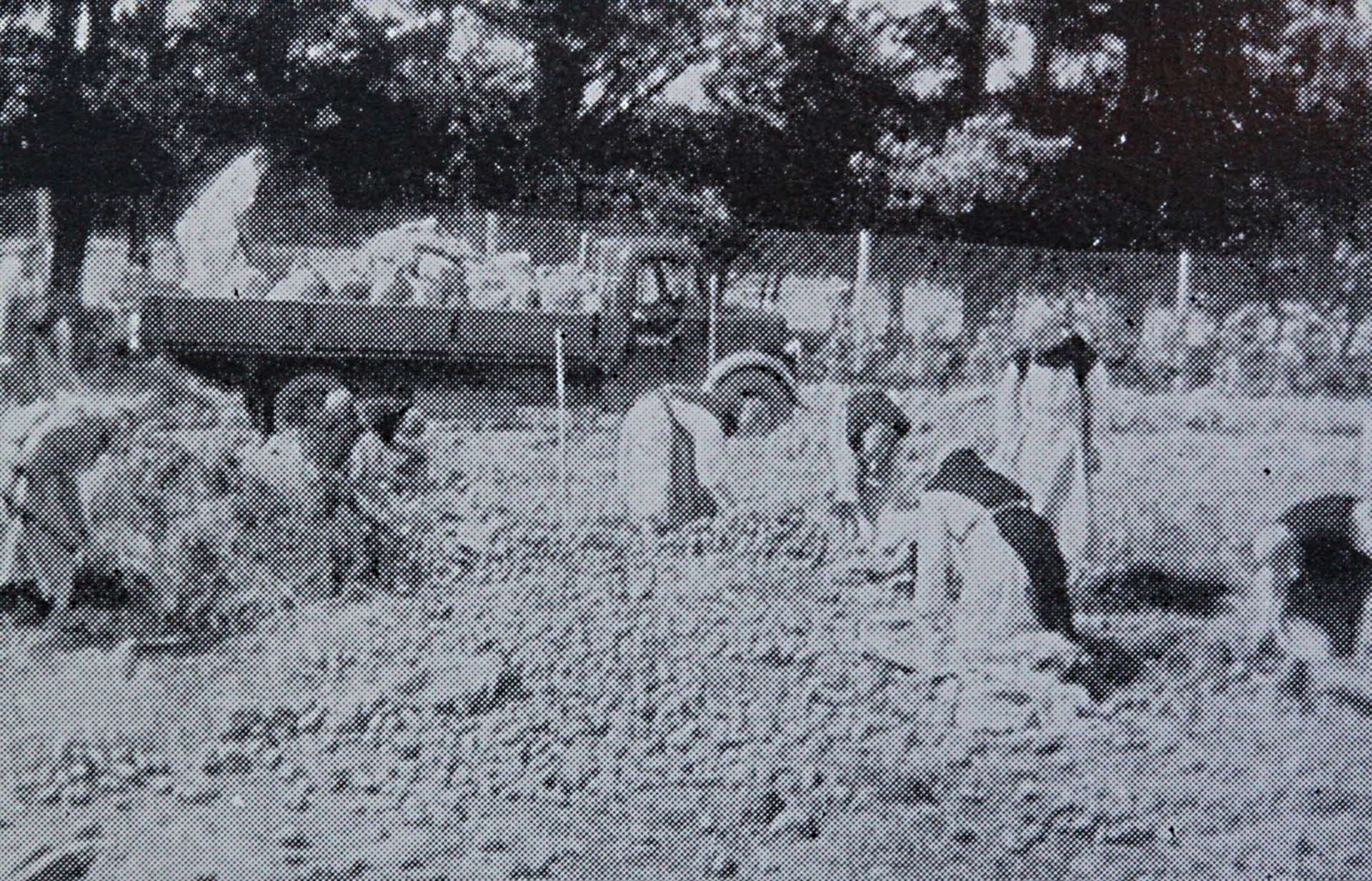 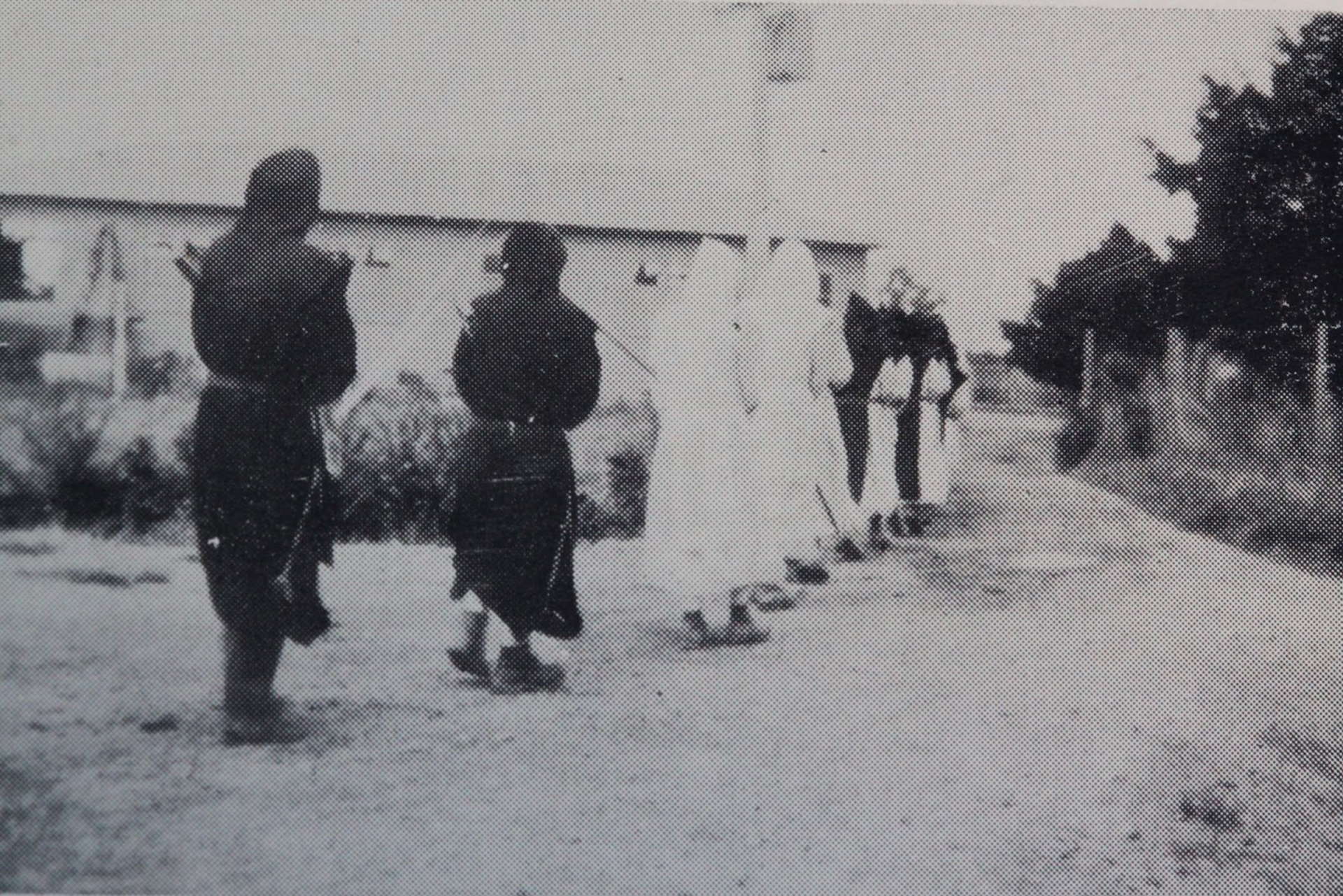 The first people to occupy the Kōpua/Ormondville/Norsewood area were the Kupe people who, following their arrival to Aotearoa around the 11th century had initially settled and occupied the eastern coastal areas around and north of Castlepoint. Kupe’s people were often referred to as Te Aitanga a Kupe (Kupe’s descendants) and later with their occupation of the Kōpua, Takapau and Waipukurau areas as Ngai Tangowhiti. Their occupation of these inland areas with its bush cover and clearings lent itself to hunting of the moa birds common in the clearings that were formed naturally within some sections of the densest podocarp rainforest ecosystem in the world. One such clearing of the great bush was at the main road end of Kōpua Road.

Later perhaps in the 12th century, a noted Māori explorer Whatonga who had navigated the Manawatū river by canoe to near the Manawatū gorge, climbed the Tararua Range and beheld the great expanse of forest to the east which ran both to the north and south as far as the eye could see. He claimed this great forest by naming it “Te Tapere nui o Whatonga” (the Great District -food basket- of Whatonga). Whatonga took a second wife Reretua who was of the Kupe people and their grandson was Rangitāne whose descendants went on to settle and to occupy the Tamaki nui-a-Rua (Dannevirke and districts), Wairarapa, Manawatu and the Wairau regions.

The term ‘Kōpua’ is associated with “deep water pools” and one account is said to have been given to the area during the time of Tarawhata (sometimes referred to as Whata) who fished for eels there and lived about five centuries ago. Tarawhata, who as an earlier traveller through the area with his dog Mahurangi, was responsible for several local names such as ‘Te Whiti a Tara’ and ‘Rākautātahi’. There were numerous settlements along the Manawatū river from its source and some in outlying areas who’s resident hapū were with strong links to Rangitāne.

One such hapū, ‘Ngāti Parakiore’ had a pā site east of Kōpua and this pā linked with two other pā sites, one west of Kōpua towards the Ruahine Range and another at the Manawatū gorge. In the early 1800s, these sites were important and linked (in communication with each other) to provide early warning of northern and western tribal threats who by then had obtained muskets and threatened southern NZ tribes.

The Kōpua area was used by early Māori to harvest tōtara trees from which waka or large canoes were fashioned. Some of the largest tōtara in New Zealand were sourced near Kōpua with one such tree being given a name ‘Te Taupā ki Heretaunga’.
It had to be dynamited to enable it to fit into the Waikōpiro sawmill which was located only a couple of kilometres from the monastery.

During the First World War, large quantities of puffballs (fungus) were gathered from the Norsewood area and sent to the battlefields of Europe to the Māori battalion. They were used to cover wounds and were effective at protecting wounded soldiers from infection.
(Associate Mike Stone met with Dr Manahi Paewai
Kaumatua QSM Dannevirke to gather this information. October 2019)

Footnote: A piece of the tōtara mentioned by name here was built into the inlaid wooden tabernacle made for Oystein and Maria Andresen for their chapel in Norsewood. Maria is a companion of Kōpua monastery.
Further information available from the book Rangitāne, by Jock McEwen, 1986

As early as the 1860s, NZ Parliament purchased large tracts of land from Maori landowners. The great seventy-mile bush or Te Tapere Nui O Whatonga was purchased. Kōpua is at the northern region of this area. Many Scandinavians emigrated to Aotearoa with the prospect of work and land ownership. The first immigrants arrived from Napier in 1872 by horse to spend their first night in a clearing called Te Whiti now part of Kōpua Road. Settlers from Norway, Denmark and Germany were allocated 40 acres of bush to clear and work on a railway line and roads provided income. At the monastery end of Kōpua Road a settlement of over 1000 people was formed near the establishing railway line.

Mark Twain – passing through Kōpua in 1895 – describes his view of Te Tapere nui O Whatonga , the densest podocarp rainforest eco-system in the world. The abbey sits at the northern edge of this great forest described as a cathedral by those passing through on foot. On Monday December 2nd, 1895, Mark Twain and his party left Napier and travelled to Palmerston North “not far short of 13 miles an hour,” past the end of Kōpua Road. His diary records, “A perfect summer day: cool breeze, brilliant sky, rich vegetation. We saw wonderfully dense and beautiful forests, tumultuously piled skyward…sometimes these towering upheavals were festooned and garlanded with vine-cables. And cocooned in another sort of vine of a delicate cobwebby texture, “supplejack” I think. Tree ferns everywhere -a stem fifteen feet high, with a graceful chalice of fern-fronds sprouting from its top-a lovely forest ornament. There was a ten foot reed with a flowing suit of what looked like yellow hair hanging from its upper end..” Mark Twain was to speak to a large gathering in Palmerston North that evening and then next day onto Whanganui.

A photo taken in the 1890s by Thomas Hyde shows Te Whiti a Tara clearing where the first Scandinavians spent their first night on arriving in the area 1872, This is commemorated now with a sign down Kōpua Road near a large kahikitea tree (just past the golf course). The clearing according to Patrick Grant who wrote “Forests of Yesteryear,” was formed by (strong) gales in the Waihirere period (1280-1400AD). He added there were “no stumps or logs encountered…when it was first cultivated,” pg 87. This clearing was also the place where (Anglican) Bishop G Selwyn stopped in the summer of 1842 and held the first Christian service in the region (now called Tararua). Of course, early Maori had been saying karakia in the Te Whiti o Tara clearing for centuries. One clearing of around ten in the whole area is called the Seventy Mile Bush or Te Tapere nui o Whatonga. This, the densest podocarp rainforest in the world, stretched from south of Eketahuna to a little north of Kōpua. 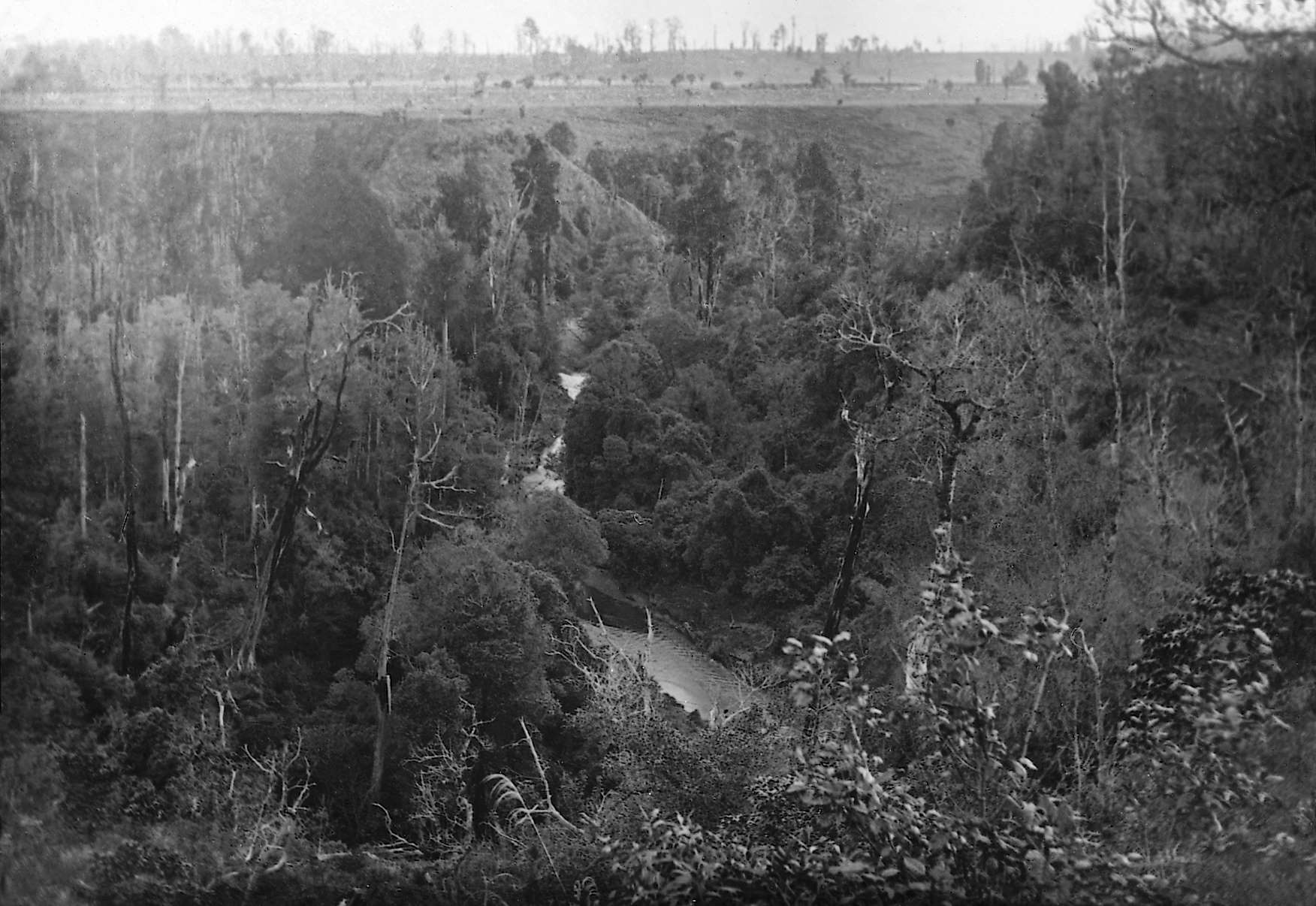 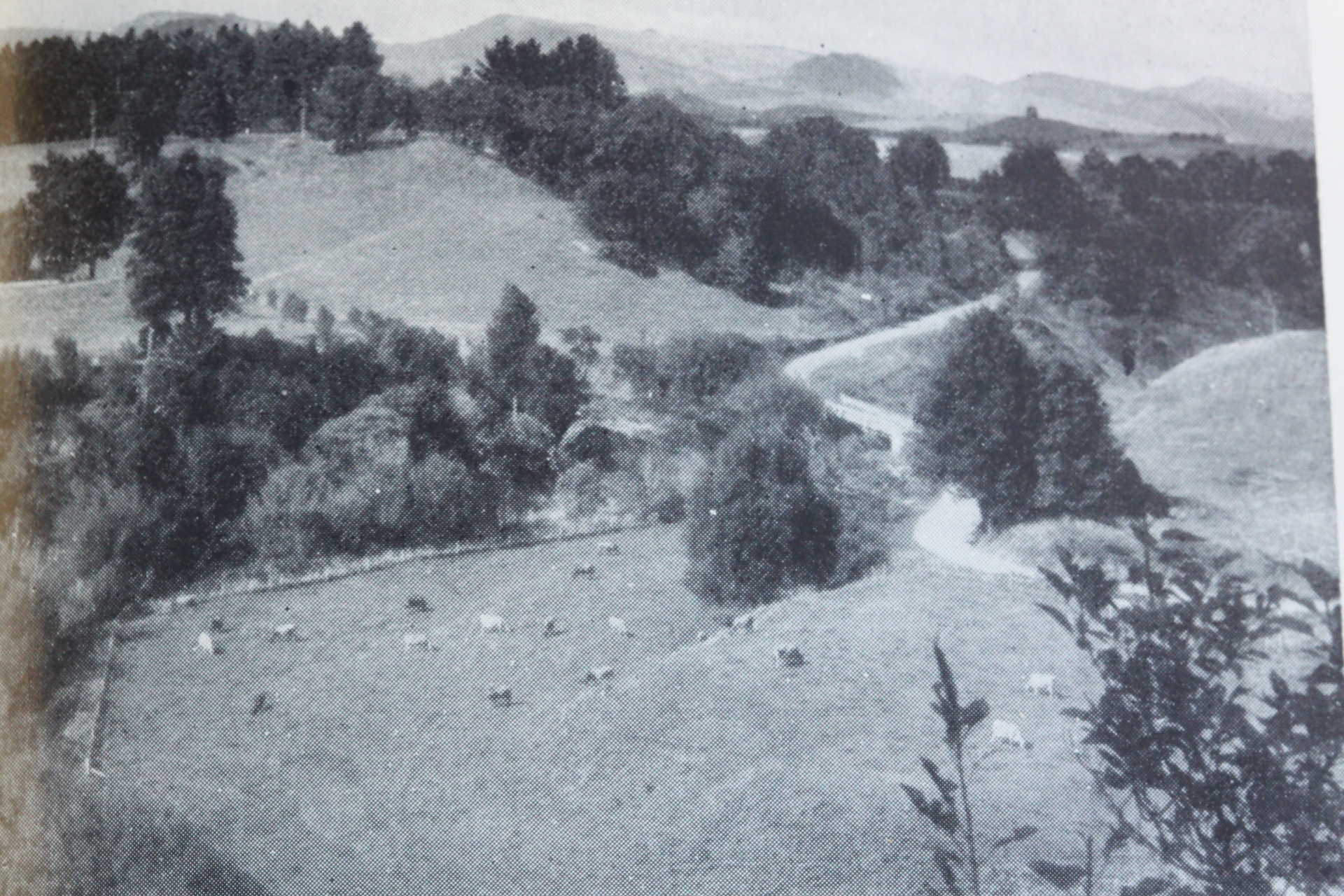 With a recurring historical theme of Cistercian efforts to return wasteland into a more productive environment, it seems appropriate in 2022, the twentieth year since the formation of the Kopua Cistercian Associate community, that Associates support the monastic community to restore a wetland on its grounds.
In 2021 a draft Kopua Habitat restoration plan was presented to the Monastic community and supported wholeheartedly. The plan was later also supported by the regional council with some funding.
These comments were received (16-8-21) from Father Nicho.”Last night at supper I put the “habitat restoration” idea to the Community and they all supported ..(the)…creative plan. It would greatly benefit Monks, Associates and Companions in their “monastic-contemplative” prayer-journey! ”

Kopua Monastery Habitat Restoration Project
Aim:
· To enhance the biodiversity of bush and wetland on unfarmed land at Kopua
· To enrich the experience of those walking the trails
· To develop a wider collaboration with other groups to support this project

Associates and their supporters have sought to coordinate with other groups interested in supporting this development and have found ways to continue to hold working bees without affecting the safety of the monastic community. Please contact the National coordinator if you or your group would like to assist. 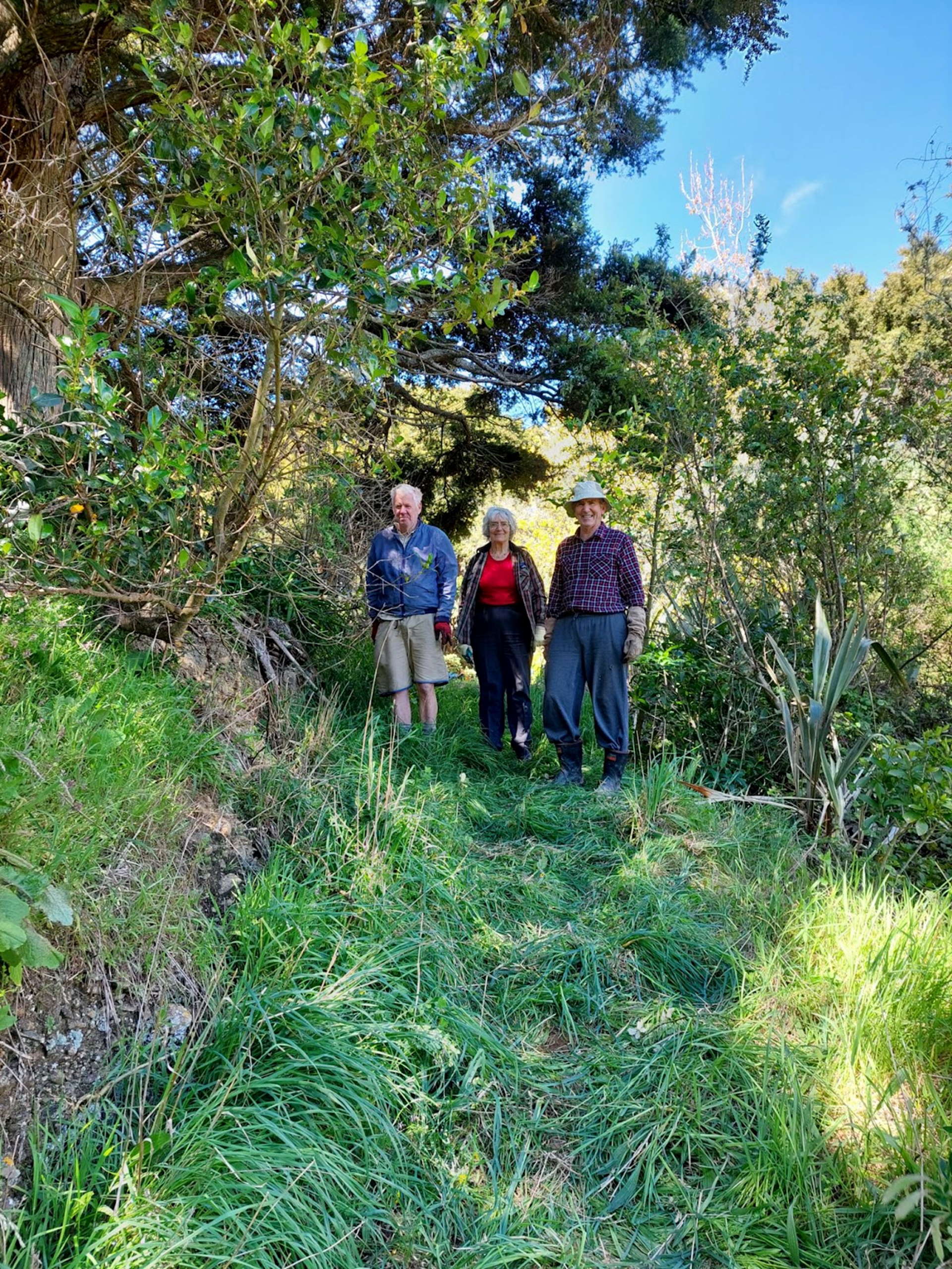 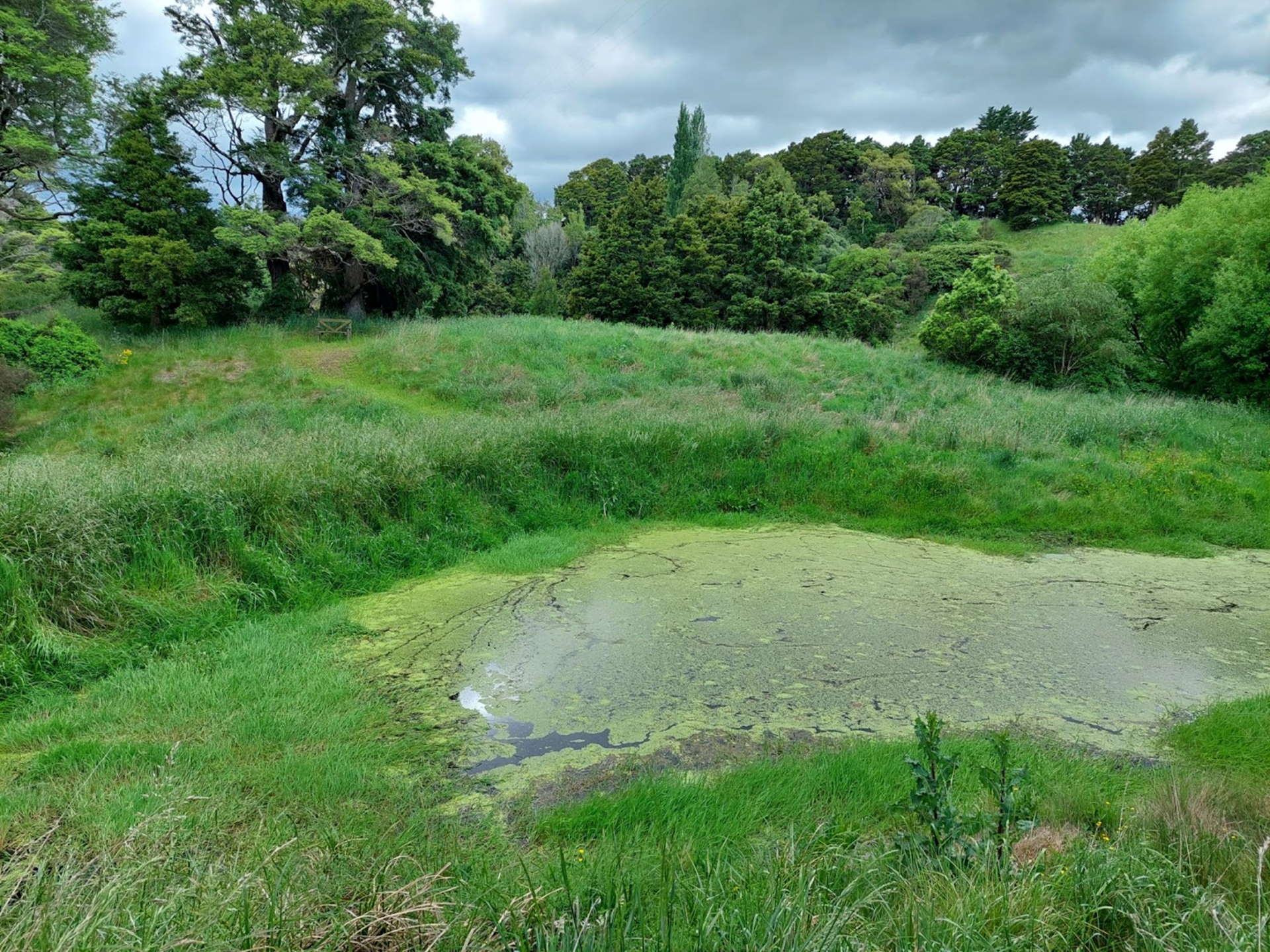